I've just bought this book from Amazon - it has some real useful ideas and tips on How to Pray...hence the name!

Check out the www.dear-god.net prayer site - it's quite insightful. Thanks to Youth Ministry Blog for pointing this one out!

Another idea from the Baltic at Gateshead....one of the exhibits was by an artist called Barthelemy Toguo. As part of this, he had covered all of the walls in the rooms with complete sheets from news papers (of the "broadsheet variety). These were not clippings, simply the pages of the news paper stuck on the wall. In addition to this he had marked out all of the text with a black marker pen, which gave the effect to the paper being censored. This meant that only the pictures remained. From my point of view, thing highlighted the pictures in a way that you would not normally notice and it caused you think about the subject matter behind the photo....I suspect this could be used as a way to stimulate prayer in a way that creating a collage of pictures does not. According to the blurb (if I remember this correctly), the artist was trying make the point that sometimes too many words get in the way....check out this page on his website.

"Pray it" with peelable photo stickers 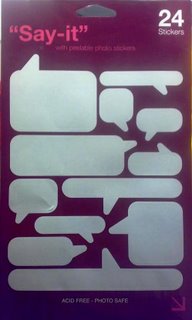 During a recent trip to the Baltic at Gateshead I came across these "peelable photo stickers". It looks like this would make a great idea for prayer....get a load of photo's or newspapers, write our your prayer on the label and stick away!

I've just put togeither a "beer mat" prayer card that I'm sending out to all the churches in our area. The idea is to keep people upto date with what we are doing. I've uploaded the "template" for this here. Note that I've printed this on thin A4 card using a colour laser printer.

I've just uploaded a template for a postcard I've put together. I've printed it double sided, in colour, on 200gm white card. We are using this to keep folks up to date on various projects that we are working on. You can download the template here. If anyone knows of any other templates that are freely available, please let me know!

Thanks to David Keen, I've just come accross the Creative prayer achive on www.prayerrequests.co.uk. It has loads of interesting creative prayer ideas...well worth a look.

I've just noticed that Visions have added some of their prayer ideas on their website. Check out this sample page.

Prayer idea - from the Eden project

I went to the Eden project a few weeks ago - definitely worth a visit. In one of the buildings there was an installation made from netting suspended from the ceiling in a circle. The whole thing was about 5 meters high. Next to it was a table with strips of coloured material (about 20 cm x 3 cm wide) and a notice What is important to you?


The idea was to take a piece of the material, write your though on it and then tie it to netting. It looked like they raised the netting a little higher each day so it would appear to grow higher. From the resulting pattern, they must have changed the colour of the material each day. Anyway, I thought this would be a idea that would be adapted for a prayer event...

Note that I posted some pictures on my moblog - see my post here.

While I was in Poland, I noticed a shop selling small flags - the kind of things that you'd put on a table to decorate them. They looked something like this, but they were a bit cheaper! It occurred to me that you could use these to prompt prayer - perhaps set out a series of tables, each with a flag some "interesting" facts about that country.


If you can't get hold of the flags, you could just print some out. I notice that wikipedia has a load of them here: http://en.wikipedia.org/wiki/Gallery_of_flags_by_design

I've seen this used at a conference I attended some years ago. The idea is to distribute sheets around the room, one for each letter on the alphabet. Then invite people to move around the room a pray about something related to that letter of the alphabet.

Talk response 24: the news in pictures

As an alternative way of praying about the issues going on in the world, try using the news in pictures from the BBC website: http://news.bbc.co.uk/. See the link on the left hand side. For greater effect, collect the pictures for a week or two.

See these ideas for praying: http://www.methodistchildren.org.uk/project913/913prayer.htm

I noticed this website at Greenbelt - it has a few ideas for creative prayer.
Technorati tags: youth ideas

He're an updated version of the prayer collage talk we did last week at Pathfinders.  A useful tip I discovered: if you want to get hold of old newspapers (from the last few weeks) in a hurry, call at your library - they will probably give you their old newspapers.  They were very helpful to me!
Technorati tags: youth work, youth ministry, youth talks, youth ministry resources, prayer

Paper prayer chains - see the conclusion to this talk on friendship

Family service - prayers for our nation

We're doing the prayers this morning in Church with some of our young people...we're going to pray for our nation. Here's a copy of the script we're going to use.

TV prayer - video a news program such as Newsround. Show highlights to the group and ask them to pray about the issues raised

Prayer balloons. Ask each person to write a prayer topic on a piece of paper and put it inside a balloon. Blow the balloon up and let it go so that balloons are distributed all round the room. Tell the group to stamp on a balloon and pick up the piece of paper that was inside it. Invite them to pray for the subject on the paper.

The 10 x 10 website shows all the latest news as a series of pictures. Why not use it for prayer?

Make a montage out of magazines. Include key headlines. To finish it off, write on some suitable words of prayer, ie, "Lord hear our prayer".

Make a friendship bracelet. Each strand could represents a prayer. I think I saw this at Spring Harvest

Display the Worldometer and use this as a prompt for prayer.

Put the names of the people present into a hat. Ask each person to pick out a name and pray for them

Light a candle for someone or something

Pass the parcel prayer:
1) pray when the music stops
2) include cards in the wrapping paper that are used as topics for prayer.

Make a giant map from an old road map - invite people to pray for different locations on the map. You could use post-it's (arrow shaped ones)